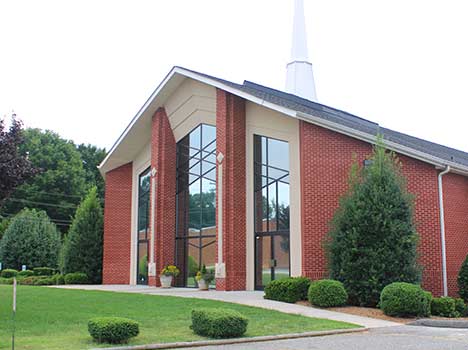 The Emmanuel Baptist Church was primarily organized and established by 20 persons at a prayer meeting, on May 14, 1969 under the leadership of the late Reverend John G. Whitfield. Reverend Whitfield suggested that the church be named Emmanuel, meaning "God with us". The name was unanimously agreed upon.

The following Sunday, worship services for Emmanuel Baptist Church began inside a house located at 114 West Long Avenue. One month later, on. Sunday, June 13, 1969, the congregation began holding worship services in the former Gastonia Gazette newspaper building, also located on West Long Avenue. Three months after that, in September of 1969, land was secured and Phase I of the church began. Five months later in February, 1971, after much prayer, the members of Emmanuel gathered for the first worship service in Phase I.

As God gave Pastor Barber vision and direction, under his leadership once again, the membership outgrew another worship area. Phase III seemed to be on the horizon!

The building of Phase III of Emmanuel Missionary Baptist Church began on June 19, 1994. A groundbreaking ceremony was held to announce and celebrate the beginning of this phase. Two years later Phase III was complete! And on Sunday morning, March 31, 1996 our Pastor, Samuel H. Barber, Jr., lead the Emmanuel Missionary Baptist Church family as they marched from the Phase II building worship area into the present church edifice.

Early in 2007, Pastor Barber, after much prayer, announced his impending retirement. So, on July 6, 2007, a retirement banquet was held in honor of Pastor Barber. The next day, on July 7, 2007, Pastor Barber officiated his last wedding as pastor of Emmanuel Missionary Baptist Church. On the following afternoon, during an anniversary program celebrating him for 31 'A years of service as pastor, Dr. Samuel H. Barber, Jr., ended his tenure as pastor of Emmanuel Missionary Baptist Church.

After an extensive search and much prayer, the members of Emmanuel Missionary Baptist Church chose another vessel of whom they would follow as she follows Christ. On November 8, 2008 the church made history when they elected Reverend Kimberly D. Moore as the Senior Pastor of Emmanuel Missionary Baptist Church. Pastor Moore would be named the first female to be elected to the office of Senior Pastor within the Gaston County Baptist Association. On Sunday, December 7, 2008 she was officially installed as Pastor and since her election, the church has grown by leaps and bounds numerically and spiritually. Emmanuel has embarked upon a new dimension of worship and service to God under her leadership.

To God be all the glory for the great things that he has done and that which he is yet to do. Only God knows what the future holds - but rest assured that a future doing that which pleases God is inevitable and it is certain that better days are ahead as the scripture tells us: "The glory of the latter house shall be greater than of the former, saith the Lord of hosts: and in this place will I give peace saith the Lord of hosts." Haggai 2:9